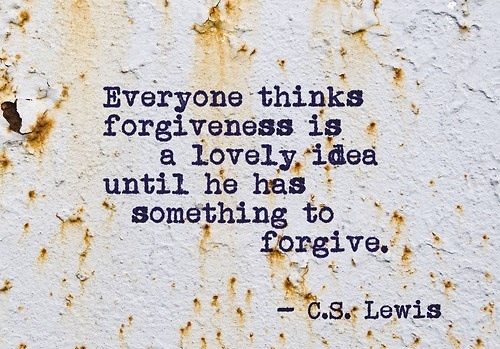 Have you ever felt lonely? Forgotten? Unnoticed? Lately, I’ve been stuck in this kind of pit of isolation. There are times when I feel that had I disappeared, no one would notice. Life would go on as usual. There are times when Satan whispers lies like “Their lives would be so much better without you,” and, “You’re such a burden to them.” The more I listen to them, the louder they become, and eventually I begin to believe the crap that that devil is trying to sell me. Before I continue, let me make something very clear – I am NOT suicidal.

This season of my life has possibly been one of the hardest. The strangest thing is that I think that its an answered prayer. One of the biggest lessons I’ve learned in walking with the Lord for the past four years is be careful what you pray for. You never know how God is going to answer you.

A while back I had asked the Lord to show me the world through His eyes. The beginning of the answer came with pain. The incident left me with a bundle of emotions. I was hurt. I was angry. I felt unloved and alone. I felt betrayed. Ultimately, I felt unimportant.

I had always heard that God has purpose in everything that happens. Every detail in a believer’s life is meant to teach them and to ultimately prepare them for the Father’s presence. The anger and the pain that had hit me had made me a stranger to grace and blinded me to mercy. It took me a few months before I realized what the Lord was trying to tell me – Jesus experienced the same feelings, however he dealt with them differently.

Jesus came to earth for us. God became human because he loved us. He didn’t have to, He chose to. The ones He came for didn’t welcome Him with open arms, though. We called Him a liar, an imposter. We mocked Him. We denied Him and claimed not to know Him. We ignored Him. We beat Him past recognition, and in an ultimate attempt to rid ourselves of Him, we crucified Him. The very people the Son of God had come for wanted nothing to do with Him. He had done nothing to deserve any of the abuse He endured. The craziest thing about this whole incident is Jesus’s response. He. Came. Back. For us.

I cannot imagine the pain Jesus experienced. No one can. His love for us is so much greater than any love we have ever experienced. I can only infer that the degree to which He experiences sorrow over our denial of His love is greater than the pain we experience when someone turns away the love we extend to them. The greatest difference lies in the responses. While we cling to the pain inflicted, Jesus is quick to forget and let go of it.

There is a story in Matthew 18 referred to as the parable of the unforgiving servant. A king wishes to settle accounts with his servants. One of these servants owed him 10,000 talents. One talent is equal to about 20 years’ wages. Do the math and you’ll see that this dude has no chance in heck of paying the king back! (20 years x 10,000 talents = 200,000 years’ wages) This servant begged the king for patience and promised to repay him (umm… yeah right). The king’s pity for this man led him to do something incredibly insane. He forgave his servant’s debt and released him! The servant walked into the king’s courts expecting prison, or possibly even death, and walked away free, owing the king nothing in return.

This servant was granted a priceless second chance, however something blinded him from the grace he experienced. Right after he was released, this man went and found a coservant that owed him 100 denarii. One denarii is equal to one day’s wages. (So the coservant owed him 100 days’ wages) Filled with anger and wrath, the forgiven servant tried to choke out the money from his coworker demanding that he pay it at once. This fellow servant begged this man for patience and promised to repay him. Sound familiar? The forgiven servant did the same to the king. However, despite the fact that he was forgiven a large debt, the forgiven servant refused to show the same grace to his coworker. He threw him in prison until he was able to pay his debt. Can anyone say shady?

When the king heard of this, he was furious. He said to the forgiven man, “You wicked servant! I forgave you all that debt because you pleaded with me. And should not you have had mercy on your fellow servant, as I had mercy on you?”

Angered by this servant’s behavior, the king threw him in prison until he could pay his debt. This servant blew his second chance when he refused to share the grace he had experienced himself.

Reading this story, I am fascinated by the king’s response and utterly annoyed by the response of the forgiven servant. How could the servant be so unforgiving after being shown so much mercy? The fact of the matter is that I am that servant on a daily basis.

Anger blinds us to the grace we’ve been granted. It’s almost like we forget how much we’ve been forgiven. We seek after the things owed to us and pay no attention to the mercy at hand. In the story of the unforgiving servant, had the king not forgiven his servant his debt, the money owed to the servant would belong to the king.

I so often forget the incredible debt Jesus paid for me, the debt that the Father forgave. I vengefully seek after the debts owed to me - the apologies I never received, explanations left unexplained, healing for the pain. The more I recall what I lost, the more I seek after it. Freedom comes in forgiving those debts and sharing the grace extended to me.

One of the greatest proclamations of the gospel comes in sharing the grace you’ve personally experienced. As C.S. Lewis stated, "To be a Christian means to forgive the inexcusable because God has forgiven the inexcusable in you."

Is there a debt you have yet to forgive?
Posted by Lauren Raye at 8:23 AM No comments:

Lauren Raye
I am the disciple Jesus loves.