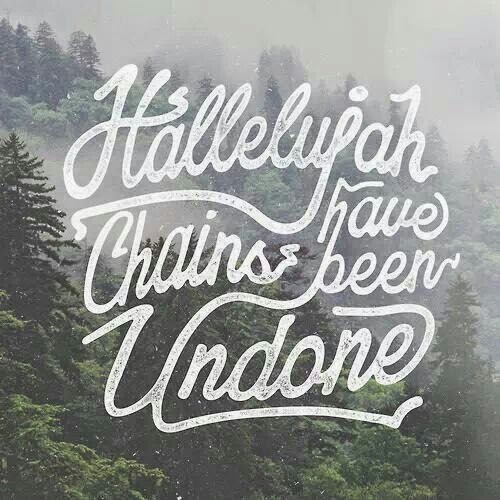 Those dark words took me by surprise the other day. I had been best friends with that voice not too long ago. The voice had beckoned me once again to turn from hope. I was eating and started to feel that familiar guilt and lack of control. The temptation of throwing up started to look real attractive. I started to prepare myself to follow through with it when...

I was reminded of freedom.

Bulimia's a hard cycle to break. Binge, purge, repeat. Once you do it for so long, you start to lose hope of ever escaping. It's addicting, but far from enjoyable.

Hearing those words took me back to all those horrible, empty nights spent in the bathroom. The memories of the endless cycle of shame quickly flooded my mind. Did I really want to return to that?

A few years ago, there would not have been a choice. I was a slave to the disorder. It controlled my thoughts, my choices, every concept of my life was dictated by this sickness. I would spend vast amounts of time planning and thinking about my next "episode." I didn't enjoy the cycle of this awful disease, but I didn't know how to break it.

Thank goodness Jesus is stronger than I am.

When I was tempted to dance with those demons again, the Holy Spirit was close by to remind me of what I had received in surrender to Christ's strength:
Hope.
Freedom.
Peace.
Healing.
Self-control.
Love.
Patience.
Joy.
Gentleness.
Gratitude.
Life.

Did I really want to sacrifice these things for what I had left behind:
Shame.
Guilt.
Chaos.
Discontentment.
Pain.
Hatred.
Slavery.
Brokenness.
Lack of control.
Death.

I'm reminded of when Moses lead the Israelites out of Egypt. They had been literal slaves to the Egyptians for over 400 years. God used Moses to grant them freedom and lead them out of this bondage. They were grateful at first, but encountered difficulty when going through the wilderness. They became hungry. God fed them with this rain bread stuff called manna. It would fall from the sky. The Israelites were given just enough to be satisfied. Eventually, this wasn't enough, and they began to complain to God about their misfortunes. Numbers 11:4-6 says, "...And the people of Israel also wept again and said, 'Oh, that we had meat to eat! We remember the fish we ate in Egypt that cost nothing, the cucumbers, the melons, the leeks, the onions, and the garlic. But now our strength is dried up and there is nothing at all but this manna to look at.'" These people had been slaves and they were longing to go back to their bondage in Egypt just for a meal! They had forgotten that their food was free simply because they were not. I find their thinking to be foolish, but I'm also prone to it.

I was a slave at one time as well. There are still times like the other day when I think about returning to the chains I was freed from. There are even times when I try to put them back on. They just don't feel the same. I've experienced freedom from the bondage of my sin and the more I walk in this freedom, the more unattractive sin becomes. Although this freedom requires a lot of pain and sacrifice, it is well worth it. I don't want to return to Egypt anymore because what I've encountered in the wilderness far outweighs what I've left behind in Egypt.

Is there anything you think might be keeping you from freedom?
Posted by Lauren Raye at 10:02 AM No comments:

Lauren Raye
I am the disciple Jesus loves.